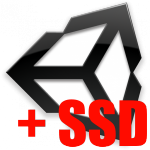 I was wondering if I move my Unity3d project from HDD to SDD, how it will improve performance? There are two possible cases. First, if you already have your system  (with Unity3d editor) installed on SSD (I hope you do) and a second case is when you have only HDD (I hope you will buy SSD asap). To figure that out I made some simple tests

I took a first computer with OS and programs installed on SSD and run all tests on a project which was located on HDD, then I moved the project to the SSD drive and did the same tests again.

A second computer has only HDD drive, but faster CPU. I run tests only once.

Now more about the project. At Novility, we are creating next-gen interactive training system (Novility HELP, coming soon at HITEC). Our project is almost 7 Gb big, so all tests were made with this pretty big project.

As you can see, there is not much difference if your system is installed on SSD, an overall performance of the whole system already improved. But if you migrate your system from HDD to SSD it will give you ~1,8x speedup in your Unity3d development. Besides all other performance improvements (faster program and system loading, UI response time, etc).

It is worth to have SSD as a main drive in your system, and for a very large files you can always buy cheap and spacious HDD.

Just wanted to say thanks, I was looking to purchase a SSD and wanted to know this ;)

Is it possible to get result for lightmaping on each system?

I just tested this with a 30 GB project and have to join in: Contrary to what i expected I was surprised to find out that the speed difference (OS is on SSD) with the open Uniyt project is almost zero wether the Unity project is on the HDD or the SSD. It is noticable when loading the project up first into Unity (but not as noticable as I would have expected), but build and compile times to my surprise were practically identical. I had hoped to gain some speed increases here.
I can leave my project on the HDD then and use the SSD space for other stuff that makes better use of it, I guess. After all a Unity Project with Git version control can grow quite big.