Sometimes you can get "VT-x is not available. (VERR_VMX_NO_VMX)" error if you are trying to start x64 bit virtual machine in VirtualBox. 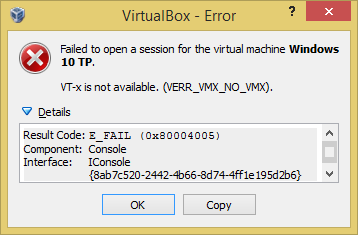 Failed to open a session for the virtual machine Windows 10 TP.

VT-x is not available. (VERR_VMX_NO_VMX).

There are three most common reasons for this error:

You can fix first one only by replacing CPU with a new one, but it is easy to fix second and third reasons.

tyvm! Turning off Windows Hyper-V did it. what side effects would this have? would it affect any windows component?

Hi. Im trying to install SAS software for my study. My computer came up with the [Fix] “VT-x is not available. (VERR_VMX_NO_VMX)” problem.
I tried looking for the virtualisation in the BIOS setting but couldn't find it.
Laptop model: Acer Aspire 4736z
OS: Windows 10 Education N (64-bit)
Processor: Dual-core T4200 2GHz
RAM: 5GB
Please help me. Is my laptop unable to install the software?
Thanks in advance.

Your laptop's processor doesn't support Intel VT-x technology, so there is no way you can run VirtualBox or Hyper-V on it. If you want to check whether your computer supports any virtualisation technology go to Command Prompt and type systeminfo. Down to the bottom, you can see Hyper-V requirements. If all of it says yes then you can run VirtualBox. But I don't think it will work on your particular processor. Check this website: http://ark.intel.com/products/37251/Intel-Pentium-Processor-T4200-1M-Cache-2_00-GHz-800-MHz-FSB for Intel Virtualization Technology

Can Hyper-V be disabled temporarily, without uninstalling it?

It worked for me, Thanks Alot

Hi
having a host ubuntu 16.04 lts and the same error
Bios virtualization is enable
any hints for this scenario?
thanks thomas

Thanks, it worked, bad thing is that Docker and VirtualBox can't run simultaneously but the goal is to migrate all to Docker so,

This helped. Thanks! I also changed the drive to Solid State. Settings>Storage>highlight drive>Check Solid Sate.
Seems obvious, but I had to do it. I also had to reboot 2 or more times after changing to Vt-x in BIOS.

Thanks, I solved it, it happened after installing Visual Studio.

Thank you very much!

Since 1709 or earlier there is "Guarded Host" as an optional feature.
If you have Hyper-V disabled but the feature was on, VB will throw this error. - So just make sure that this feature is disabled as well.

I cannot see Hyper-V in Windows features and when i run the cmd dism.exe /Online /Disable-Feature:Microsoft-Hyper-V, it shows Feature name Microsoft-Hyper-V is unknown. I am trying to run open edX. Please help.

Your advice helped me a lot. My Windows 10 host machine was running Virtual Box machines just fine until very recently when I got the error, even though I've had "Intel Virtualization Technology" enabled for a while in my EFI/BIOS, and only my Cent OS 7 VMs were having trouble booting. Oddly, my other Linux flavors were still booting up.

I had to disable Hyper-V in Windows Features like you suggested and things gradually started working. When I first disabled that feature and rebooted, I selected the kernel for CentOS but then it claimed that my processor was i686 and not the required 64-bit. This was rather strange indeed, but I have not seen that particular error again after simply trying to boot it once more. Now it's running like when there wasn't a problem. So in the the end, turning off Window's Hyper-V feature did it, I'm pretty sure.

in my case, it was already enabled in the BIOS and only worked when activated the option Preferences> System> Processor PAE / NX

What if I have to have Hyper-V enabled as well?

Well, my problem is the Hyper-V but I can't uninstall it because I need it for development on Visual Studio (with windows/android virtual machines), and I also need the VirtualBox with my Debian to make the other work, so what can I do to preserve both options?

Thank you for your help. It did the job for me

Thank you. 1st solution is working for my machine. :)

Hi I have a Dell Inspiron 1545 model intel Core 2 Duo T6400 32-bit Win 7 book and when i enter bios setup i do not see anything called Virtualisation option … does my computer support virtualisation or not? … i m trying to install oracle virtual machine on this computer … is it possible .. please help .. need it desperately .. thanking you tons and much appreciated

Hi I have a Dell Inspiron intel Core 2 Duo T6400 32-bit Win 7 noted book and when i enter bios setup i do not see anything called Virtualisation... does my computer support virtualisation or not ... i m trying to install oracle linux on this computer ... is it possible .. please help .. need it desperately .. thanking you tons

Yes it worked for me.
I also had to turn PAE on in config.

Thank you a lot! Solution 2 fixed my problem!!

Hi! I am using SAMSUNG SERIES3 model and 64-bit window10 book . I cannot find 'Virtualization' in my notebook computer. So I try to confirm 'Hyper-V' but it also no problem. Is it that Virualbox is not run because I am using a laptop computer?

Failed to open a session for the virtual machine SAS University Edition_1.

VT-x is not available (VERR_VMX_NO_VMX).

Just a note for people that may have this problem: you must not only disable Hyper-V but must check that the "Windows Hypervisor Platform" is not activated either in the Windows Features panel; it cost me hours to find that this was checked and caused VirtualBox to refuse starting...

Good! Disable Windows Hypervisor Platform works for me!! Thanks!

i can not run this virtual machine SAS University Edition_1.
help me please.

Hypervisor platform is disabled using the command given above. Did the restart too. Its still not working.
Intel virtualization is enabled in BIOS settings. In BIOS settings it also says VT-x is supported. But I still get the same error message. Is there something I am missing? Please help.