Almost a year ago I have started a topic on LinkedIn where I asked how old were you when you wrote your first program and what was the programming language. This post collected a lot of feedback (more that 170 comments) and had a lot of views (36k+) and finally ("one year later" meme here...) I got a time to put all the answers together and made some charts.

Disclaimer: This poll and statistic is not representative and only reflect small portion of my LinkedIn network.

The majority started their exiting journey to the world of programming with Basic. In this statistic, I have combined all variations of BASIC (QBasic, Visual Basic, Sinclair Basic, Casio Basic, MSX Basic ) under the single category. 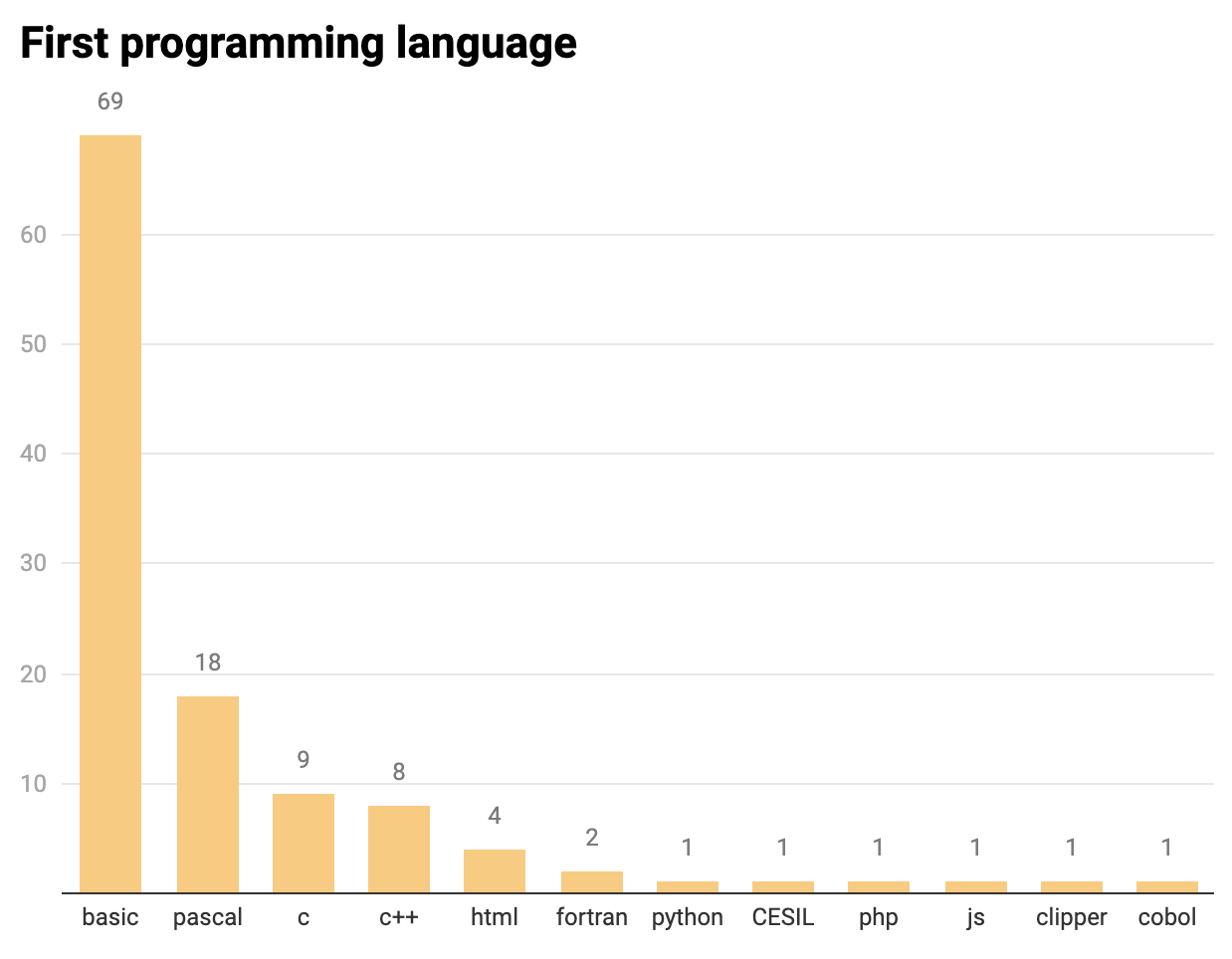 The second one is Pascal, which was quite popular in post-soviet countries, we were studying it at school and at university. I think this is the reason it was the first programming language for many people.

I was really surprised I didn't see python so much (only one answer), since now it's considered the best language to start learning programming (at least if you google "What is the best programming language to learn first").

The same counts for JS, only one person wrote his first program in JavaScript.

I think this is because LinkedIn is not so popular among younger generation (you can see later that a lot of people wrote their first program on ZX Spectrum or Commodore) so this group is underrepresented in this poll.

One person stated with COBOL:

I was 25 and used COBOL; a language that I have now completely forgotten.
Recently, the daughter of a colleague asked me if I could help her write a simple instruction in Haskell; a language I had never heard of before. I made a demo of that instruction in Excel: was easier and worked better than the Haskell-version!

And one programming language I have never heard before, CESIL:

How old were you?

As we all know, the age make no difference, you can start learning programming at any time. For example, Masako Wakamiya, an 81-year-old Japanese woman, just single-handedly created her first iPhone game.

In this poll, the most people wrote their first program before they turned 17. 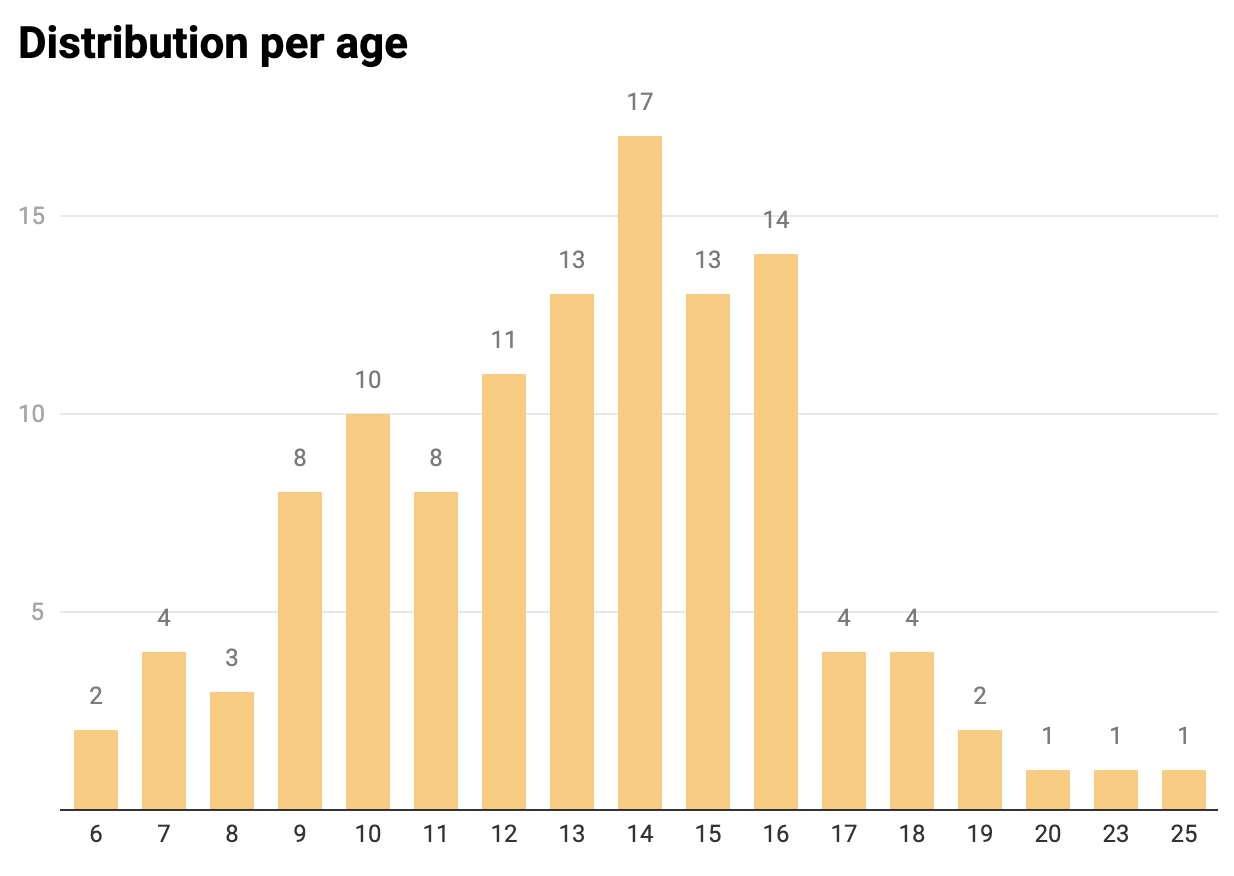 Some started quite early:

Ans some even earlier:

BASIC on ZX Spectrum. 6 years old. Was not allowed to play games until I write some program... :)

and translation from Russian:

6 years old using BASIC (from the cartridge on "Electronika МС 1502" (soviet IBM PS XT) to write games, of course. Then Basic for "Poisk-1", then Basic for ZX Spectrum. Then I saw C and was stunned - it was just a like after Basic. But I was already 11 years old. It was 1993 and we didn't have internet yet, so we reinvented the wheel all the time. Then Assembler x86, Pascal, JS, but this is completely different story.

It's also interesting to see the distribution per age and language. 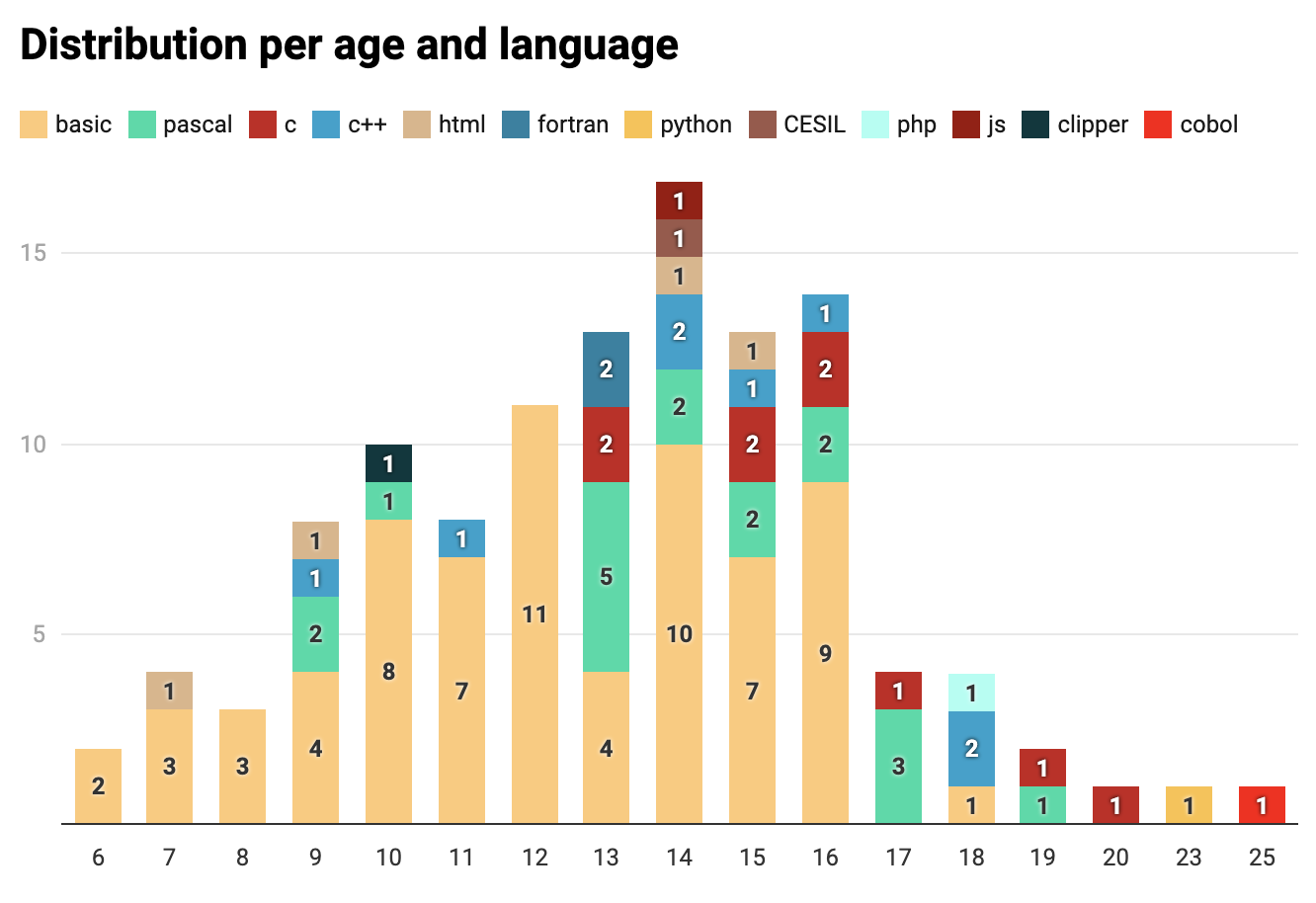 As I already mentioned, I was a bit surprised that so many people wrote their first program on ZX Spectrum and Commodore 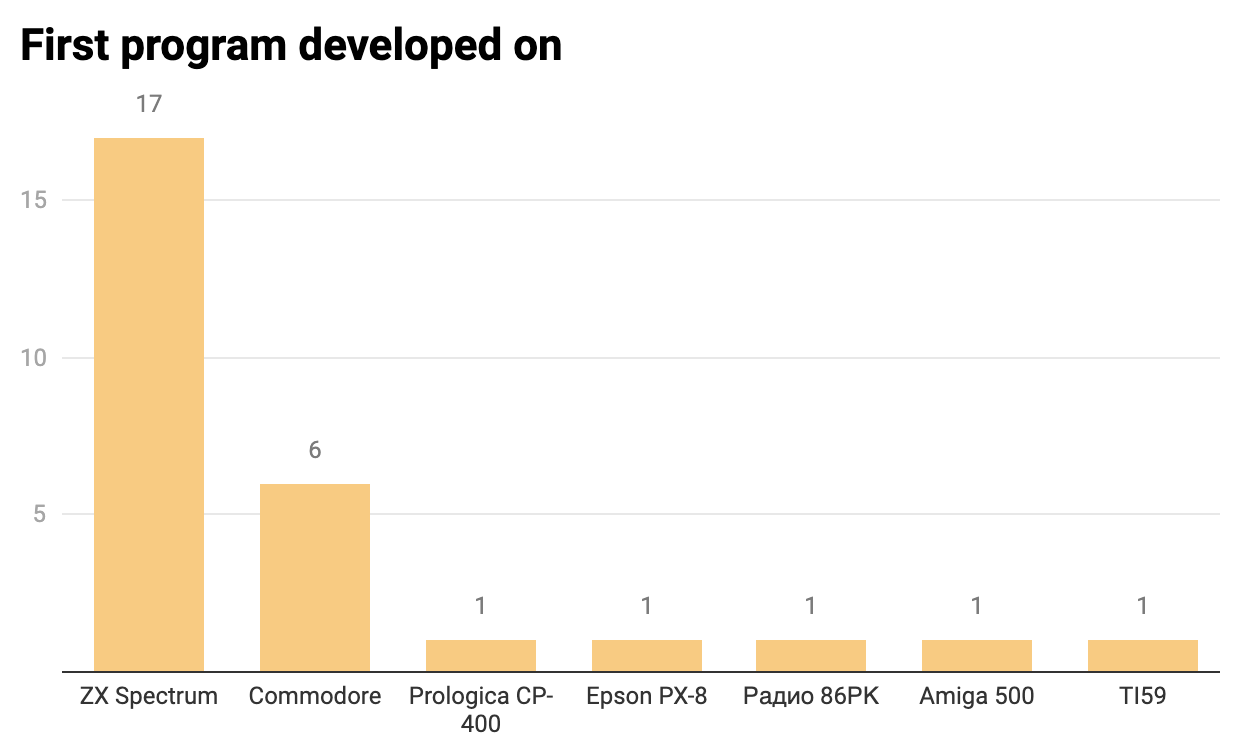 Since I didn't ask this question in my post, not so many people shared what was the first computer they wrote the first "Hello, World!".

There were some other interesting machines mentioned in comments:

11 years old, 1982, Basic on a ZX Spectrum 48k. My father bought me the machine together with the game Space Invaders, so when I got tired of playing, then the only option left was the programming guide that had followed the machine.
Commercially, 18 years old, 1990, REXX under CMS on IBM S/370 VM, doing tools for optimising my own workload as a team lead in a factory.

Or just a Casio calculator, but so much creativity:

Casio Basic (on Casio programmable calculator) 16 yo. Program a 2D game in the Casio calculator where it draws a soccer goal, a ball at a random spot, and you have to choose a point such that the trajectory of the ball through that point hits the goal. Special feature was deflection when you hit the side bars.

His friend still remembers this game:

I remember this game Jad! We used to play with your soccer Casio in the school bus!

it doesn't even matter.

It doesn't matter when you started programming or what language was that, the most important thing, you liked it and continued exploring this amazing world of computers and technologies.

Thank you everyone for sharing your stories with the community. You are the best!